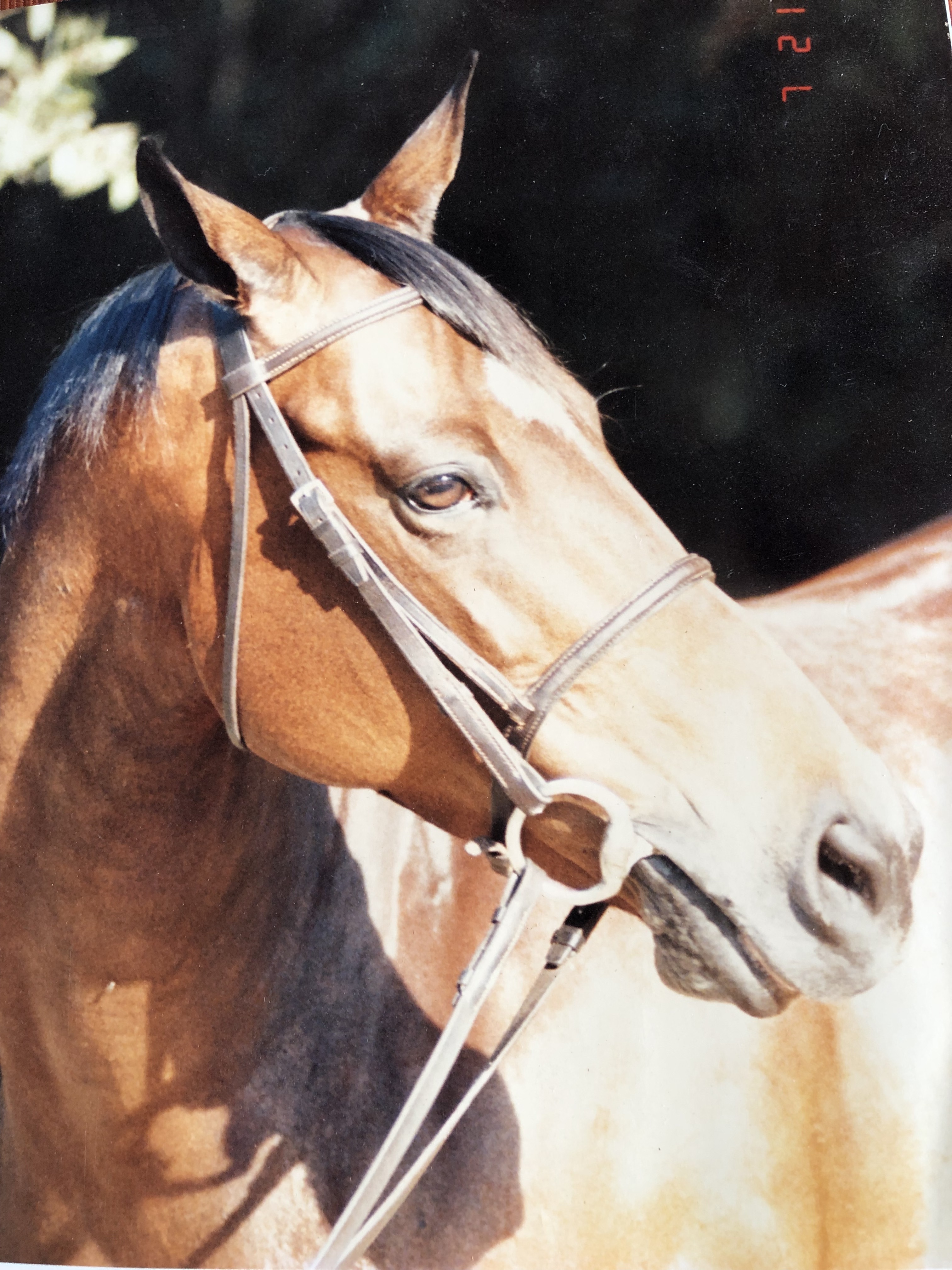 Back in the nineties I had a show horse named Serendipity. Everyone in the barn,called her by her nickname L.B. because, when she first arrived at the barn, no one knew her name. The L was for little, she was on the small side, and the B for bay, a color description for horses who are dark brown with black markings. She was a petite, beautiful, dappled bay Thoroughbred, and was a wonderful beginners horse for jumping.

She was very gentle, with a sweet disposition, and very safe for someone to learn how to jump obstacles. I had a great time going to shows, competing, and taking lessons on her. I was in my twenties, and was very goal oriented. I had dreams of being a great jumper rider, and had aspirations of learning how to train my own horses in the future. It was such a dream come true for me to own my very own horse, let alone belong to a private riding school in beautiful Laguna beach California.

I rode with mostly very wealthy lady’s from that area, and privileged children who owned there own beautiful and very expensive ponies and horses. I, of course, was barely able to afford my hobby, and worked pretty hard to just pay the bill. I stayed with this riding club for a few years ,and got pretty good at riding.

Then one day, I overheard that one of the trainers we had there, was going to start teaching at a stable inland, closer to the area I lived. I decided to move L.B. It was a great move. She was only a five minute drive from my house, to go visit and ride at the new stable, instead of the thirty minute drive to Laguna beach I had been making. I was able to find an indoor, outdoor stall for her.

She, being like most show horses, had lived in a 12 foot by 12 foot indoor box stall, and was only outside for riding and scheduled turnouts. Most days when I went to see her at the new stable, she was always outside enjoying the sunshine on her back, and stood closely next to another neighboring horse for company, separated by a fence.

At this new place, I was able to have access to trail riding with her. We had a great time and lots of adventures together. When I think back of all the potentially dangerous rides we went on in the foothills of Southern California, I can really appreciate what a dependable, smart horse she was. She got me out of quite a few bad situations unscathed. We really did have a great time together.

One day I was riding her in the public arena, and some people were watching. A lady said, ‘You know , your horse is lame’. I had no idea what she was talking about. As far as I knew, she was perfect. So now this opened a can of worms for me. I talked to some other people, and they said ‘yes she has a slight limp on the right front leg. Barely perceptible, and impossible for the inexperienced rider to notice. I even mentioned it to a friend from the previous riding club in Laguna, that was very experienced, and she said, to my shock, ‘yes, of course I know your horse is lame, she was given painkillers by the trainers every night to mask her limp so you could ride her all along. I couldn’t believe that, first of all they would secretly drug my horse, and secondly, they obviously knowingly, sold me a lame horse. I was slowly learning the ropes about how the horse trade really worked.

I vowed to never purchase another show horse from those trainers without a full vet exam. I had a vet come out to see her right away, and he immediately diagnosed an old fracture in her ankle with an X-ray. I was told she was ‘serviceably sound’ and to just give her a mild painkiller at night. Now that I knew she was lame, I could hardly enjoy riding her anymore. I could now feel the slight limp with every step she took, and I felt guilty making her jump obstacles. I loved her so much, but I was so ambitious in my riding. I wished I could afford to buy another show horse. But I knew the only way I could have a new horse, was by selling her. People bought and sold horses in these circles like they were cars. I, on the other hand would cry at the thought of selling this animal that I loved.

Then one day something surprising happened. I was told by one of the trainers that the parents of a little girl that took lessons at our barn would be interested in buying L.B. I thought that would be perfect, I would be able to see L.B. every day still, give her carrots, and attention. And the little girl would be easy on her, just slowly trotting around, no real jumping or anything strenuous. In my mind it would be as if I still owned her.

The deal was made, and I bought a new young thoroughbred with no lameness issues.

One day, only a few weeks after the deal was made, I went to the barn and got my new horse out and stood him up to groom him out in the barn isle, where I had a view of the riding ring. It just so happened that a groom had L.B. out in the riding ring chasing her around to get some exercise on her own. We call it a turn-out, it’s done when horses are confined in stalls, to let them ‘get the bucks out’ especially before riding them.

I was brushing my new horse, when suddenly, very clearly a voice spoke to me. The voice was heard internally in my mind, a mans voice. It said ‘your horse is going to get hurt very badly’.  For some reason I automatically talked right back to that voice without a second thought, and said ‘it’s ok, I will be with her’. I then thought, what the hell was that? Who was that? I sort of shrugged my shoulders in bewilderment, and then looked over my shoulder, only to see L.B. galloping, then come to a sudden stop, and hold her leg up in the air.

I ran over to the riding ring and saw her sweating profusely and shaking. The groom walked over to her, and at that point I ran to the barn office to get a trainer to help. I had no idea what to do, and felt so helpless. The trainer immediately grabbed a shot of pain killer, and ran with me to the riding ring. She gave her the shot, waited a while, and then the groom walked her to her stall. It was a long slow walk,and I went along, watching her suffer was painful, while she basically hopped on three legs, slowly, with all her veins popping out and sweating.

They finally got her to her stall, and she stood in the back with her head against the wall, with the groom holding her safely. I stood outside the stall, feeling out of place. I wasn’t experienced enough to be in there with her. I have always regretted that. She wasn’t technically my horse anymore, but I loved her just the same. The new owners were notified, and the vet was on his way. There was nothing I could do but go home.

The next day when I went to the barn, I was told the sad news that the x-rays showed L.B. had shattered her ankle bone, and the only thing to do for her was euthanization.

I felt terrible. If I was rich I could have retired her, instead of having to sell her in order to get another horse. She would be happy in some pasture grazing on grass. I felt guilty and sad. I remembered how happy she was to just be in an outside stall, and I had sold her to another person, who moved her to an indoor dark stall again, which I knew she didn’t like, because now when I’d visit her, she always faced the back of her stall, with her head in the corner. It was a stark difference from when I had her in the nice indoor outdoor stall. And now she was gone. And on top of that, I was confused and angry about that voice who told me what was going to happen to her. I didn’t understand why I was told seconds before it happened, there was nothing I could do, so why did it tell me? That question perplexed me for 20 years.

After blocking out paranormal events since childhood, I finally realized it was an awakening for my emphatic ability. It was proof for myself of the afterworld. I could no longer ignore a deep spirituality that was waiting inside me.

It wasn’t for me to stop what happened to her, only to know that it was her planned destiny, part of this drama we call life. And now I understand why her name was Serendipity, the definition is, a fortunate happenstance, pleasant surprise, and of making discoveries by accident and sagacity, of things which they are not in quest of, which is exactly what happened to me.

Thank you my guardians, guides, and L.B., who I know I will see again.

I hope you enjoyed this excerpt from my upcoming book!
A collection of short stories is coming soon. Stay tuned.